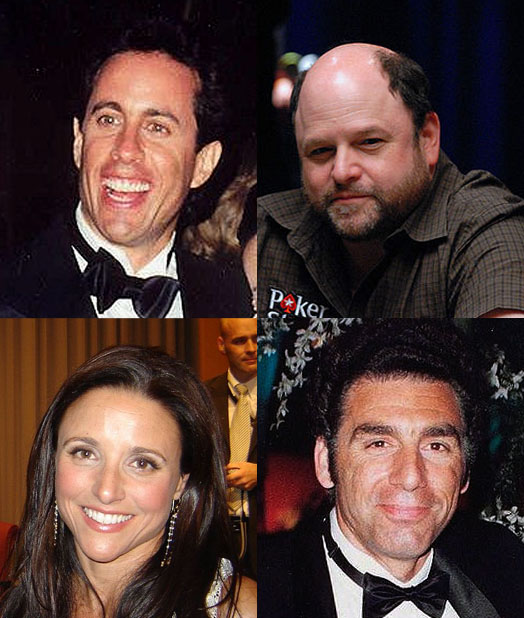 Seinfeld trivia questions and answers can bring back a lot of nostalgia for those who watched the show during its nine seasons on NBC.

The question is, how much do you know about Jerry, George, Elaine and Kramer's misadventures?

Test your knowledge with these 124 trivia questions.

Straight off the bat, here is a warm-up question to get you started:

Question: Of Seinfeld's four main performers, who is the only actor/actress to not win an Emmy for their performance?

Before we dive into the questions, let's talk about Water Cooler Trivia.

Water Cooler Trivia offers a wide selection of Seinfeld trivia questions, making it the perfect quiz platform for fans of the show.

Do you love showing off your knowledge? With our weekly trivia quizzes delivered right to your inbox, you can do just that on a variety of topics.

If you're curious about Water Cooler Trivia and want to take the platform for a spin, consider signing up for our four-week free trial with no further commitments.

What makes Seinfeld trivia so engaging?

Being one of the most popular sitcoms in history, Seinfeld attracted a wide audience that included both young and old viewers.

This show had it all: hilarious dialogue, pop culture references, witty humor and a brilliant cast of characters.

Additionally, Seinfeld gave us some of the most iconic one-liners of all time, making it a great source of trivia questions.

Where can you find Seinfeld trivia questions?

Our team of trivia pros have crafted some of the most challenging questions around, all backed up by fun facts and tidbits.

Alongside Seinfeld, you can request tailor-made trivia quizzes on a full range of classic TV shows.

How can you create a Seinfeld trivia quiz?

Our team can craft custom quizzes for any audience and can curate questions from specific topics, seasons or even individual characters.

Once you're signed up, you can pick and choose from an eclectic mix of exciting trivia categories.