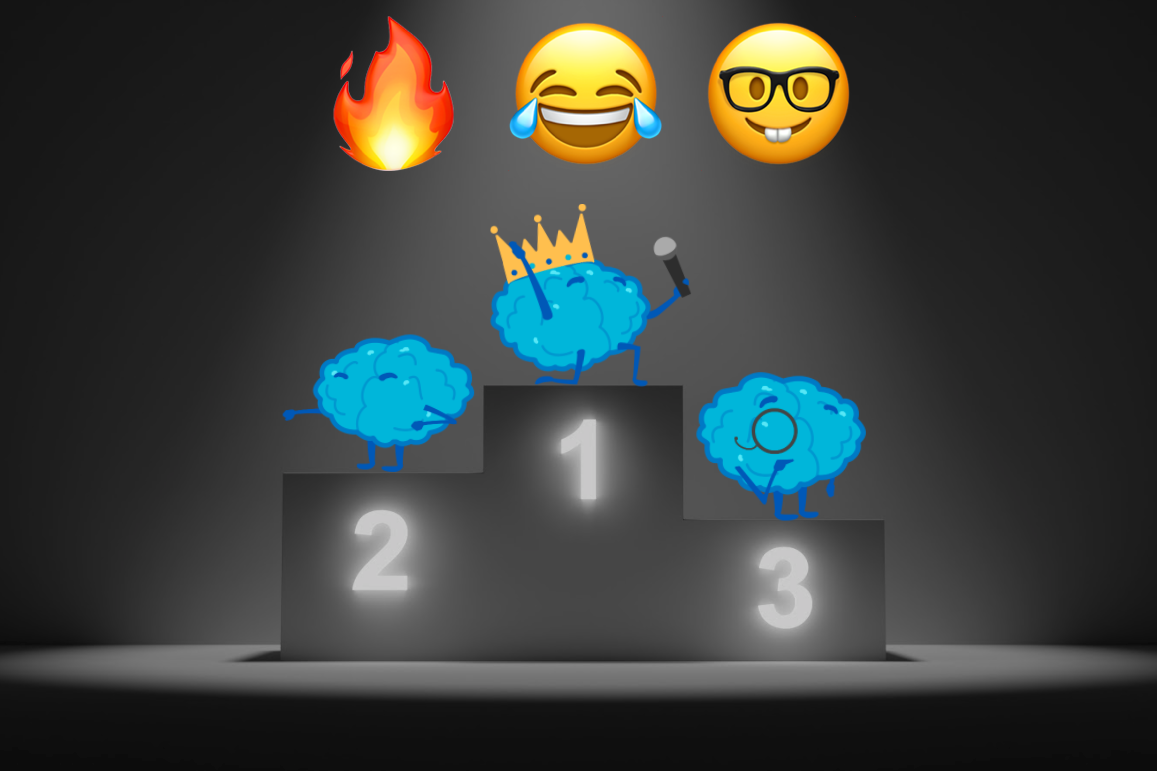 Emojis for When Your Answer Is Wrong But Made Us Laugh

We have a dirty little secret here at Water Cooler Trivia headquarters: we don’t grade every single response we receive by hand. But we also don’t let our computer overlords grade every single response either. Instead, we strike that sweet, sweet middle ground of man + machine. And today, we’re chalking up a victory for man, at the expense of machine: emojis. Specifically, we’re going to let you know when you made us laugh 😂, when you impressed us with your bonus knowledge 🤓, or when you came flying in with a hot take 🔥.‍

Why'd we do it? Because we know that to build engagement at the work place, it's all about starting conversations and expressing yourselves. Trivia becomes a more fun virtual team game when there's superlatives for funniest wrong answer, not just celebrating the person who knew the most facts. With these new emojis, we've seen more employee engagement which is a key piece of reducing the loneliness and isolation when working from home.

If we know your answer is definitely 100% correct, the computer takes care of business. So if we ask “Who was the first US President?” and you answer Washington or George Washington, humans beings will not grade your response. The computer knows it’s correct. But if you answered Washingggton our graders will see your response and give you the credit you deserve. After all, it’s a trivia quiz not a spelling bee, and who are we to question your fat-fingering of the G key? To make matters better, you’ll be paying it forward, because if any respondent at any company ever answers Washingggton as the first president, the computer will remember your response and automatically mark it as correct.

Bring on the emojis

Well, we want to give you credit for that. But we want to give you something more. A special, albeit small, recognition for making us laugh. Or for sharing your advanced knowledge on Washington’s arboreal antics. Or both. Thus…we are excited to introduce the newest Water Cooler Trivia feature… emoji reactions!

For responses that make us laugh, make us smarter, or make us gasp, we’ll be plopping an emoji into your scorecard. We’re going to be frugal in handing these out, so if you see one please know that you’re special to us. Or, at least your trivia responses are. Here’s a few responses that earned an emoji reaction in their debut week as markers of trivia excellence.

😂 Face with Tears of Joy when you make us laugh

Q: As of May 2018, who is the winningest coach in men’s college basketball? This man passed the previous record holder Bob Knight who was coincidentally his own coach when he starred for Army in the 1960s.‍

‍Q: What “G” instrument is technically a metallophone because its set of tuned keys are made of metal plates or tubes rather than the wood of a xylophone? The instrument featured famously in many Rush songs such as “The Spirit of Radio” and “Closer to the Heart.”‍

‍Q: What paper towel brand is known as “the quicker picker-upper”?‍

Ebola (Ebola Reston, to be specific) 🤓

‍Q: Covering almost every country across two different continents, what is the longest motorable highway in the world, according to Guinness World Records‍

Pan-Pacific Highway, the one from the bottom of South America to the top of North America 🤓

Q: What famed athlete famously declared of his strategy: “float like a butterfly, sting like a bee?”‍

🔥 Fire when your answer is emphatic

Q: What is the first name of the youngest child of Kris and Caitlyn Jenner?

‍Q: .de is the top level country code domain of which country?‍

Q: Bruce Springsteen is the pride of what US state?‍