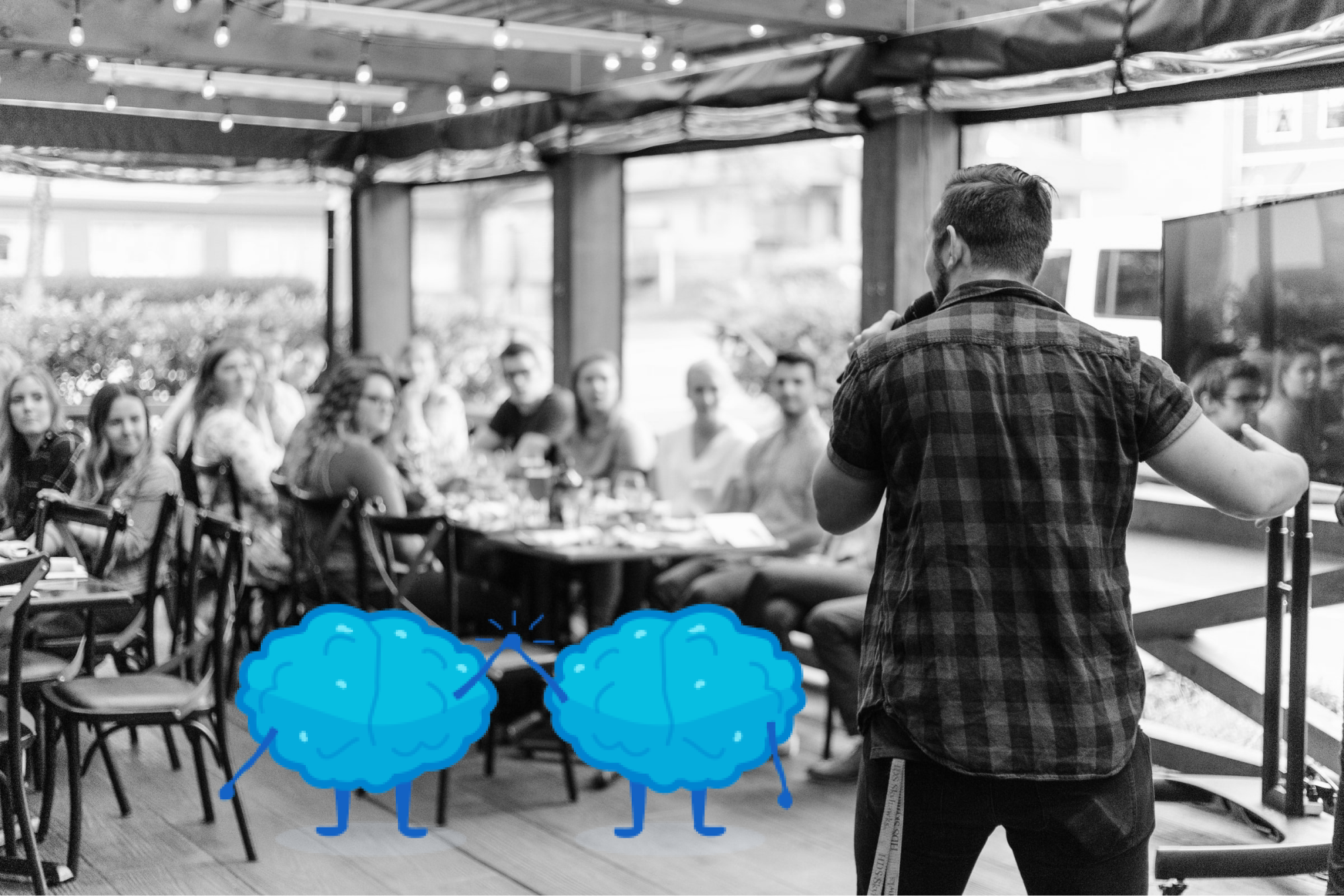 Connect with Teammates by Sharing the Stories Behind Your Trivial Knowledge

Introducing… Featured Response! Featured response is the backstory of how the heck your coworker knew that trivia question. It's an enjoyable peak into your coworker's life experiences. The team at Water Cooler Trivia headquarters is jazzed about this new feature. We’ve been discussing it for nearly a year.

In short: if you get a really hard question right on a quiz, we’ll occasionally ask you how you knew that answer. We want to know the details and happenstance and randomness-of-the-universe that led you to that trivial fact. And then we’ll share that anecdote with your team in the results.

We know that Water Cooler Trivia sparks conversations "offline" about how someone knew that answer. Now we will directly surface those connection-building, conversation-starting explanations directly in your quiz results.

We built Featured Response to help you share and learn from your teammates, foster deeper connections between team members, and ultimately inject more personality and intimacy into your favorite weekly trivia quiz.

Why we did it

There are two primary motivations behind Featured Response.

Admittedly, it's unlikely all Water Cooler Trivia participants have led lives as full of danger, tragedy, and choreographed dance as Jamal, but we are firm believers that everyone has stories worth telling, and everyone benefits when you feel like you can bring your “full self” to work and share stories from your life. So hopefully Featured Response is a teeny-tiny way to inject Slumdog Millionaire memoir-izing of your own life into the weekly trivia contest.

Second, on every demo, I reference the joy of trivia as a conversation-starter. I often mention that impressive answers spark conversations and learnings between team members. Basically, why talk about the weather or weekend plans when you can dive deeper on how Alicia knew that weird monk haircut from the Middle Ages is called a tonsure?

To make my demos easier, we wanted to build this feature. Rather than describing the ethereal benefits of Water Cooler Trivia, I can directly point out adorable anecdotes in a good ol’ fashioned screenshare.

How we did it

You, dear reader, can choose. Do you want the technical mumbo jumbo about C# and .NET or the nuts-and-bolts of how it works in plain English?

And naturally at that point your team showers you with attention and praise for both getting the question right and knowing the metadata around how you knew the question.

The fun bits were choosing the 30% threshold, deciding how to display the featured response in the results, and choosing the right emoji to represent the feature. Turns out Slack calls it dart 🎯 but Emojipedia calls it direct hit 🎯. If they paid me the big Emoji bucks, I’d call it bullseye 🎯.

We launched Featured Response in mid-October and already have many dozens of delightful anecdotes shared by participants.

Let's just show you some of these anecdotes to see if you agree regarding the delightful-ness.

Category 1: explaining how they used the clues in the question

Question: The Pobladores ("townspeople") is the name given to the 44 original settlers from Sonora, Mexico who established a new settlement that flourished decades later upon completion of the Santa Fe railroad line. By what name is this settlement known today?

🎯 How'd they know that? The Santa Fe and Mexico connection implies the Southwest.  Highlighting the small number of people suggests the place is now huge, like LA.

Question: Long-running American television show "The Bachelor" has spawned spinoffs in many other countries including the short-lived "The Bachelor: Em Busca do Grande Amor" which lasted for one season in what country? Aane Doux was the winner of Gianluca Perino's "romantic" culling.

🎯 How'd they know that? My dad spent time in Brazil before I was born and I recognized it was Portuguese in the title and guessed Brazil over Portugal.

Category 2: connecting the answer to a personal anecdote or memory

Question: Since its inception, Saturday Night Live has broadcast from what alphanumeric studio within NBC's headquarters at 30 Rockefeller Plaza?

🎯 How'd they know that? I love all things behind-the-scenes of production, so OF COURSE I took the NBC Studio tour last time I was in New York!

Question: The Asteroid Belt famously separates the inner rocky planets from the gas giants that begin with Jupiter. What is the name of the astronomical entity beyond Neptune's orbit that also houses the three officially recognized dwarf planets: Pluto, Haumea, and Makemake?

🎯 How'd they know that? I grew up in Cocoa, FL. My father works at Kennedy Space Center, and so did my grandfather. Space was a constant presence in my early life.

We have a few follow-up features we’re going to add, starting with a confetti explosion when it's your time submit a featured response.

We'll also collect our favorite anecdotes and send a thank-you gift to the participants who's anecdotes move us to tears (of laughter, preferably).

Stay tuned. And give us your ideas on what features we should be building next!