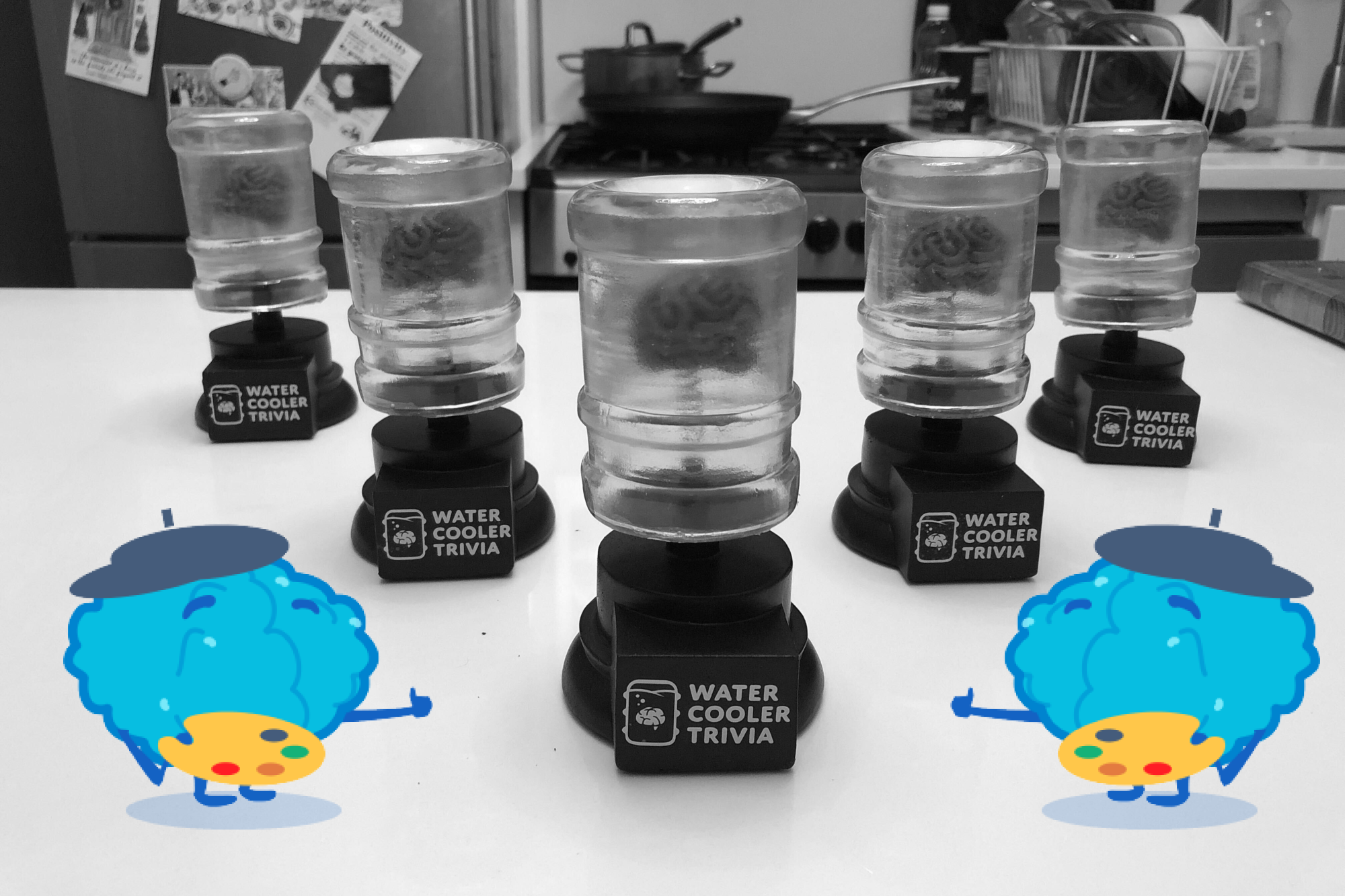 Why and How We Manufactured Bobblehead Trophies

‍Here’s the one(ish)-sentence summary: we took a goofy idea with some crummy designs made in Google Slides and ended up contract manufacturing custom bobblehead trophies. We send these trophies to every team that subscribes to Water Cooler Trivia.

How it all began

In January 2019, our team met to talk goals for the upcoming year. We had laid the foundations for a product that brings work teams closer together and builds office culture, and we wanted to keep improving the product and bringing it to more teams.

However, with only a single-person engineering department, we couldn’t bite off much more than one big feature each quarter. So we started thinking about a customer-centric feature that didn’t require a single line of code: a Water Cooler Trivia bobblehead trophy.

From idea to design

Back in 2019, there was a little old institution known as the office. This is where coworkers would spend much of their waking week, working in non-socially-distant proximity.

This is also where teams would discuss the weekly Water Cooler Trivia results. The winner is celebrated in the results email each week, but that fleeting sense of accomplishment, well, fleets.

We wanted to create a new way to celebrate the winner. Stealing the idea of a roaming championship totem like the Stanley Cup or a WWE belt, we wanted to send a trophy to each team. The winner would proudly display the trophy on their desk for the duration of their reign -- typically one week but longer if they had back-to-back victories.

Rather than imitation-chrome over a faceless figurine like the soccer participation trophies of our past, we wanted a trophy that reflected the quirky, fun tone of Water Cooler Trivia. After all, the goal here is team-building fun, so the trophy might as well be fun.

I had a clear vision in my head of what these trophies would look like, but no design skills or manufacturing experience. My design toolkit? Google Slides. It’s free, super easy to share, and it has a crop button.

I searched for a few inspiration images: blue brains, water cooler renderings, and brain trophies. The results were pretty much exactly what you would expect.

Next up, I played with a few iterations of what this trophy might look like by overlaying text blocks and smashing two images together. These looked bad.

So I iterated a few more times. I noodled with the concept of putting the brain in a water cooler (basically a 3D version of our boringly 2D logo). I toggled the transparency and saturation, hoping that I would magically stumble upon a not-totally-horrible-looking combination.

It turned out fine.

From design to manufacturing partner

Quick aside: a friend of a friend owns a business that sells Bitcoin socks. You read that right: socks, not stocks. Black foot-and-lower-leg coverings dotted with yellow BTC logos. I was amazed that the design, manufacturing, and shipping were all through Alibaba, the Chinese conglomerate often compared to Amazon.

Critically, he clued me in to the fact that Alibaba has a super-accessible RFP (request for proposal) feature.

You enter a description, an image, a quantity, and a price point. Within hours you are flooded with offers from manufacturers. This was extremely convenient.

Five vendors reached out within 48 hours in various mixes of Chinese and English. I wasn’t quite sure how to decide, so I went with the vendor that was most responsive to my questions and had the most robust English.

Our contract manufacturer? Xiamen Xinfade Trade Co with Jonas from their team as our touchpoint throughout the process.

From manufacturing partner to bobblehead trophies

The email back-and-forth with Jonas began in earnest when I sent my “designs” (Google Slides screenshots) in March 2019.

We discussed project timing, and in less than two weeks he sent pictures of the mold.

At this point, we'd agreed to 300 trophies for $3.50 each, but we hadn't signed a contract or paid a single cent. So when Jonas sent through the mold images I was floored: this was actually happening.

The molds looked good enough that we locked in the deal with a signed and paid invoice.

By April 11, Jonas sent me painted versions of the molds so we could get a sense of the colors. He asked about box details, colors, stickers, size, and more fine tuning.

We asked for a lighter resin to make the cooler more transparent. Jonas made it happen. By mid-May, Jonas sent the picture of hundreds of bobbleheads coming off the assembly line. We were ecstatic.

From China to Brooklyn

Turns out shipping across an ocean with a small quantity of low-cost items is… expensive.

Jonas asked who our freight-forwarder was. We had no idea what he was talking about. He asked about our customs and import licenses. We were still clueless.

We solved those boring logistics, but the cost was quickly escalating.

One small issue: that price only got the trophies to us. We would still need to mail out each one individually to each customer, adding another $3-6 per trophy.

Tearing them down to build them up again

After an early July vacation, I returned to my fourth-floor walkup Brooklyn apartment with quite the surprise: 12 large, heavy boxes stacked neatly in the atrium. I didn't know how long the boxes had been there (I’d been out of town for over a week), but I was sure it'd confused my neighbors.

With the help of two roommates, we carried the boxes up to our apartment. We unboxed the trophies, excited to see the outcome of the quixotic quest. They looked great! The brain was on a spring-loaded cylinder so it did indeed bobble, the transparency on the cooler allowed for easy observation of the richly-colored blue brain. It worked out better than I could have expected.

When I bobbled the bobblehead for a second time, the cooler separated from its circular base, sliding right off, and thusly decapitating the trophy.

The glue that attached the open cooler cylinder to the circular cardboard base was shoddy. As bobbleheads, we fully expected them to receive regular rattling.

I hoped I’d pulled a bad apple out of the barrel, but quality control checks on the next five trophies confirmed the problem was widespread. It was simply a weak point in the construction.

The glue did not hold the resin and the cardboard together nearly enough for a trophy meant to bobble. After confirming the worst, we acknowledged that it was going to take serious elbow grease and human power to get the trophies in customer-ready shape.

Before undertaking the crafty project, we fixed a handful and took them on a quick photoshoot around New York City.

The process of precisely breaking 300 bobbleheads and re-gluing them in two different places with Gorilla Glue is not a quick one. Especially when you add in the time of unboxing and re-boxing each individual trophy. My partner, my roommate, even my sister visiting New York all generously chipped in their time. In total, we spent about 30 hours fixing up the trophies.

Not exactly scintillating work, but we didn’t want to make it to the finish line only to send our customers a knowingly-busted object.

Customers seem to genuinely like and appreciate the trophies. It gives our whimsical, fun-loving brand a more physical presence for hundreds of teams around the world.

We’re a pragmatic team here at Water Cooler Trivia HQ. We don’t think these trophies are going to make-or-break our success as a team, product, and company. But it was one hell of a fun project. And we’re going to keep producing more to send to all of our customers (the first batch is nearly gone!)

Paul Graham would be proud, we did something that doesn't scale. We shipped “hardware” to each customer.

Plus, I learned. I learned that obscenely rudimentary design skills plus the power of Alibaba’s RFP system can get anything built. It was a cool learning that I’ve since re-applied exactly zero times (...yet).